28 December 2018 marks the centenary of the election of the first female MP to the British Parliament. 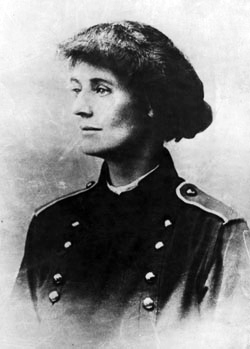 Imprisoned at Holloway Prison upon the time of her election, she didn’t take her seat in parliament…but her imprisonment was not the reason…

1918 was a revolutionary year in many respects. In November, the First World War finally came to an end, and almost immediately, the British Prime Minister David Lloyd George called a General Election. And it was a revolutionary election. Women over 30 were allowed to vote. But more than that – women could now stand for election.

Miles away from the Western Front, it had been a turbulent few years in Ireland. The long-running struggle for independence was reaching a head. The 1916 Easter Rising failed, but the nationalists were not ready to give up yet.

Most Irish nationalist were members of a party called ‘Sinn Féin’ – who had a policy of ‘abstentionism’. This meant that they took their seats in the Irish Parliament – Dáil Éireann in Dublin.

So when Markievicz was elected, she didn’t take her seat in Westminster. When the Irish Parliament first met in January 1919, she was still in Holloway Prison. When her name was called out at the meeting of the Dáil, she was described, like many of those elected, as being “imprisoned by the foreign enemy”.

The first women to take her seat was Nancy Astor (Viscountess Astor), after a by-election in December 1919.