On a recent trip to NYC, one of the first attractions I visited in NYC was Top of the Rock. I’d already been on the Empire State Building, so now it was time to experience something new. I hadn’t bargained that I’d learn a hell of a lot more about the circumstances of the construction of 30 Rock Plaza as part of the process. In fact, if the 1929 Wall Street Crash hadn’t happened, it’s possible that the iconic building might not exist at all.

For those of you that don’t know, Top of the Rock is a building in the Rockefeller Center complex, which has no fewer than 19 commercial buildings. Situated just off the famous 5th Avenue in Midtown Manhattan, the complex consists of 14 iconoic Art Deco buildings (and a private street called Rockefeller Plaza). Five more buildings were later added, bringing the total to 19.

And the name? Yep, you guessed it, named after the eminent investor John D. Rockefeller (Jr). In 1928, the site was owned by Columbia University. They leased the land to Rockefeller, envisioning that it would be the site for the new Metropolitan Opera Building. But things didn’t go quite according to plan…

The site (which was originally a botanical garden in the early 1800s) was cited from 1926 as a potential place for the new Met Opera Building. In 1928, Benjamin Wistar Morris and Joseph Urban were hired to come up with blueprints for the Opera Building. When it became clear that the Met couldn’t fund their plans itself, John D. Rockefeller Jr was recruited as an investor (though his father John D. Sr was not involved). New designers were hired, and Columbia agreed an 87 year lease for the plot to Rockefeller.

The principal architect was Raymond Hood, a student of the Art Deco movement which was gaining pace in the late 1920s. By December 1928, was all-systems-go, but two factors were to trouble the plans…

The first of these factors was the fact that Met was becoming increasingly worried. It didn’t think the proposed site for it’s new opera house was going to be profitable.

And 10 months later, everything came to a halt with the 1929 stock market crash. A few weeks later, on December 6, 1929, the Met confirmed it could not afford a new opera house afterall. Plans were halted. The era of the Great Depression had begun.

It was a dilemma for Rockefeller, however, who had signed an 87-year lease on the site. He needed to act quickly. Within a month, he had devised new plans to make the site profitable. He entered into talks with Radio Corporation of America, to build a mass-media entertainment complex on the site. Radio City was born.

And thus, building began – well, that was, after a few plans fell by the wayside, mainly due to the public giving negative feedback. Four small retail buildings and a 41-story tower earmarked the beginning of Rockefeller Plaza in 1931. This was despite the fact that Rockefeller initially did not want the Rockefeller family name associated with the commercial project, but was persuaded on the grounds that the name would attract far more tenants.

After more plan changes, the plan for the building that was to become 30 Rockefeller Plaza opened in 1933. 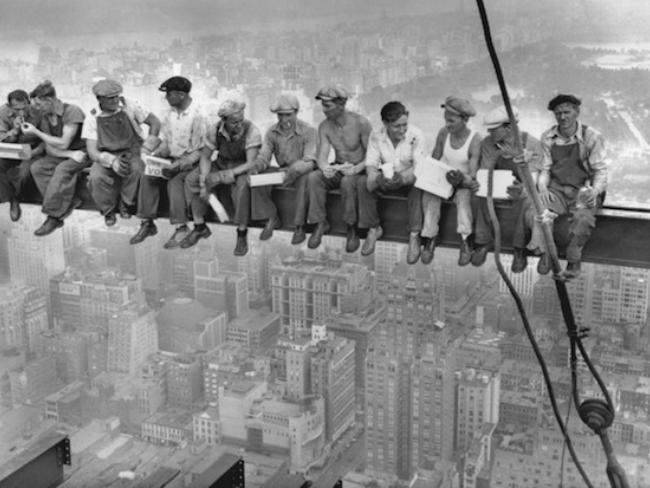 “Lunchtime Atop a Skyscraper” is on the of the most famous photographs ever taken in New York City. It was taken on September 20, 1932, showing The Rock construction workers having their lunch with no regard for Health and Safety! According to the Rockefeller Website, the photo was taken 840-feet above the ground – about the 69th floor, during the final months of construction in 1932. And the website confirms that these men are not actors – they are genuine construction workers. Whether or not the photo was staged is another debate!

The website gives a very accurate description of what this photo represents historically:

“Regardless of the specifics, this image came to represent a specific time in modern New York’s history. There’s a nod toward the Depression, when workers were happy to have a job (despite the lack of safety harnesses), as well as a strong representation of the exciting period when New York City grew vertically at a rapid rate. A 2012 film called Men at Lunch explores the immigrant backgrounds of the men in the photo, identifying some as Irish and Swedish.”

In 2010, two Irish brothers happened upon the photo in a pub in Co. Galway. Upon learning that two men from the region were claimed to be in the photograph, the brothers began researching a documentary on the origins of the men, discovering that they were mainly Irish and Swedish. In 2012, their documentary ‘Men at Lunch’ was released.

So that’s how a supposedly panoramic view of the city I’m calling home for the next three months left me realising there is always a much bigger story behind such iconic buildings. Who knows what might be on the Rockefeller Center site today if the 1929 Crash hadn’t happened?

Having lived in London for six years, I use the Tube virtually every single day. The history of it has always fascinated me – I was aware that civilians had sheltered in it during World War II, but actually descending into the stations…I couldn’t believe this was where they slept and it got me thinking about the creation of the Tube and what’s it become.

THANK YOU TO THE AUTHORS OF THE FOLLOWING SOURCES FOR HELPING WITH MY RESEARCH FOR THIS POST: