A trip to Peru is not complete without a visit to the Sacred Valley and Machu Picchu. Instead of the traditional four-day Inca Trail hike, I completed the very similar Lares Trek and learned some fantastic historic snippets along the way. Here’s what they were (and you can learn more about the Lares Trek with G Adventures here)

Contrary to popular belief, the term ‘Inca’ refers to the ruler of the last great native Empire before the Spanish conquered South America. The civilisation arose from the highlands of Peru sometime in the early 13th century, but it was not until 1438 that the Cusco became the administrative centre of a kingdom that stretched from Colombia to Ecuador, through Peru, Bolivia, Argentina, Chile and more. It’s official language was Quechua, and incorporated millions of people, until the last Inca resistance against the Spanish in 1572.

Launched a policy of oppression against the Incas for their wealth. The Spanish explorer Francisco Pizarro invaded the Inca Empire in 1532. As well as massacres, many locals died from diseases brought over by the Europeans that they were hitherto never exposed to. However, of all the Spanish conquests of South America, the Incas proved to the hardest to overcome, taking 40 years of resistance before the Spanish could claim victory.

However, the Spanish are not believed to have known about the existence of Machu Picchu.

Because the Inca people did not write down their history. They used word of mouth. They  did, however use a system of knotted strings known as quipu to send messages around their empire. Similar systems were used by the ancient Chinese and native Hawaiians.

A quipu was a portable device with a wooden bar, and hanging from it were a wide variety of colours and strings with knots tied in various ways and at various heights. It often had up to 1500 strings, and the way they were woven might also have indicated a meaning (or so it’s suggested).

And to ensure that nothing was forgotten, the Incas also had a body of expert, known as the khipu kamayuq, who memorised the oral account which fully explained a particular quipu. Their job was hereditary, meaning the oral tradition was passed from generation to generation.

The main language spoken in the region is Quechua. Quechua is the name for a family of languages that probably all derived from one common language in early times. And Quechua far predates the Incas Empire. Quechua has numerous dialects, and the although the Spanish colonials initially encouraged its use, from the middle of the reign, they suppressed it.. Yet the language survived, and today an estimated that around 10 million people speak a Quechua language. Movements are afoot to preserve the language, and in 2016 Peru made history by broadcasting the first ever Quechua language news bulletin.

Guinea Pigs are Sacred…and are eaten

One of the most common cuisines in Peru is Guinea Pig. Many restaurants will have displays outside of a plate with a whole cooked guinea pig and all the trimmings. On the Lares Trek, we visited a house which had guinea pigs roaming freely under the bed. And there are other traditions attached to the guinea pigs that illustrate their importance. For instance, a Quechua girl must skin a guinea pig to prove she is ready for marriage. Guinea Pigs were commonly used in healing and religious ceremonies, often being offered as sacrifices to the Gods.

In Machu Picchu, the remains of Guinea Pigs were found in caves, suggesting they were used for religious purposes or sacrifices there.

Ollantaytambo is an ancient Inca settlement

If you hike the Lares Trek, you’ll spend some time in the stunning historic town of Ollantaytambo. It’s name in Quechua means ‘rest spot’, and it has a unique history, being part of the royal estate of the Emperor Pachacuti during the Inca Empire, and later conquered by the Spanish. It would become a stronghold for Manco Inca Yupanqui, leader of the Inca Resistance against the Spanish.

Sandwiched between the mountains, there are some stunning ruins to view (and hike to!). It’s paved with small cobbled streets, a beautiful open main square, and well-preserved Inca Ruins. Although damaged by the Spanish, the buildings still have the remanence of that pre-colonial era.

Tip: While in Ollantaytambo, look for houses with red plastic bags hanging outside on posts. These houses are where locals go to drink chicha, a local brew made out of corn.

Hiram Bingham, the man who ‘discovered’ the remains of Machu Picchu… 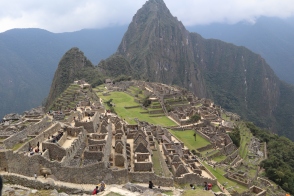 …believed he had found the Lost City of the Incas…but he hadn’t.

Hiram Bingham was a Yale University Professor who, in 1911, set off on an expedition to find the final stronghold and seat of Inca power after the Incas were forced to flee from the Spanish conquistadors – Vilcabamba having become fascinated with Inca Ruins on a previous visit to Peru. Having heard about Inca Ruins in the region from a farmer near Aguas Calientes, he climbed his way up and became one of the first white men to see the ruins of Machu Picchu for decades.

He later published a book about Machu Picchu called ‘The Lost City of the Incas’, but the city that was actually the final stronghold of the Incas was Vilcabamba, north-east of Lima.

In fact, locals in the Aguas Calientes region knew about it all along, and numerous other explorers are believed to have visited it in the 1800s, such as the British explorer Thomas Payne, a German engineer called JM von Hassel and another German called August Berns who apparently wanted to plunder the ruins in the 1860s. The site is also listed on an 1874 map, and it is claimed that it had been visited by three explorers from Cusco as early as 1901, just ten years before Hiram Bingham found the site.

More information on doing the Inca Trail with the Lares Trek is available here.

One thought on “Historic Facts I learned about the Lares Trek, Sacred Valley and Machu Picchu”